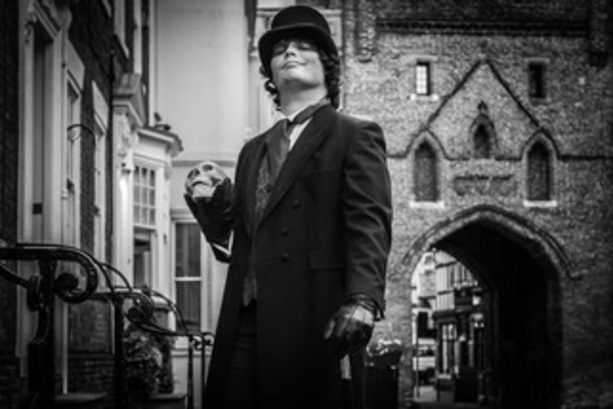 Spooky tales of ghostly carriages, spectral figures and highwaymen are sending a shiver down the spine on a new ghost adventure in the haunted streets of Beverley.

On cold, dark winter nights, a Victorian doctor in a frock coat and top hat is giving people a fright or two on The Beverley Ghost Adventure.

James, who previously worked at York Dungeon, is bringing Beverley’s ghostly past into the present on his spine-chilling walks.

He says: “When you delve into Beverley’s dark past you discover some truly horrible tales.

“Some are so grim we couldn’t include them in the tour – they made us shudder and have to stop researching for a few days until we had recovered.

“There are some streets I can’t walk down now!”

Ex-Beverley Grammar School boy James, 30, has spent 18 months searching out the grisly and ghostly tales lurking in Beverley’s bloody and supernatural past.

He says: “We have plenty of ghosts, poltergeists, ghostly carriages, spectral figures, highwaymen and soldiers to share tales of.

“There are dark stories about civil war and plague and spooky tales to make your hair stand on end. People especially like the story of the headless Danish soldier.

“Highwayman Dick Turpin was incarcerated in Beverley and I also like to tell his story.

“Dick Turpin is very much associated with York but I want to bring him out of the shadows in Beverley.”

Plenty of dramatic effect and a spot of crowd participation can be expected.

James says: “Hopefully, it will be an interactive, sensory experience.

“There’s no guarantee you’ll see a ghost, the paranormal isn’t an exact science but who’s to say you won’t see one either!”

James takes up to 25 people on The Beverley Ghost Adventure, which lasts up to two hours.

Tours take place on Wednesday evenings and private tours can be arranged for special occasions.

Visit https://beverleyghostadventure.com for information about the ghost adventure. James insists most live to tell the tale.