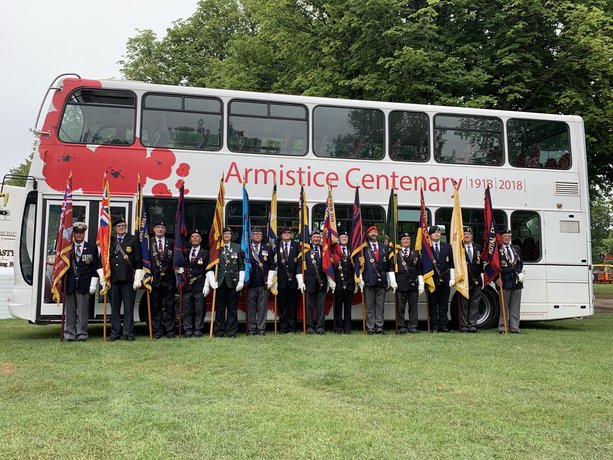 Local veterans alongside the company’s “Poppy Bus”, which commemorates those we have lost.

BUS company East Yorkshire will be showing their respect for the achievements and sacrifices of the armed forces by allowing current and past members of the military to board any of their buses for free on Sunday 14 November, to allow easier access to Remembrance Day parades and ceremonies.

Those wanting to travel free should simply show a current military ID card or veteran’s badge to the driver when they board.

The bus company has many staff members who are themselves veterans of the army, navy or air force, and these drivers will be commemorating the service of their former colleagues by wearing their regimental ties, berets, badges and medals alongside their bus driver uniforms.

East Yorkshire’s Area Director Ben Gilligan said: “Bus driving is a popular career choice for those leaving the armed forces, so many of our team have served in the military, and know what sacrifices our soldiers, sailors and aviators have to make.  Last year many remembrance parades couldn’t happen, so this year we’d like to make sure all veterans who want to can attend to pay their respects to those we lost.”

Passengers who are travelling on Remembrance Sunday should also be aware that some buses may be slightly delayed by parades taking place in towns across the region, so should allow a little extra time for their journey.  In most cases, the delays will only be for a few minutes as parades pass, but in Hull City Centre, North Ferriby, Beverley and Market Weighton there are some minor diversions.  You can find full details at eastyorkshirebuses.co.uk or by ringing BusLine on 01482 59 29 29.