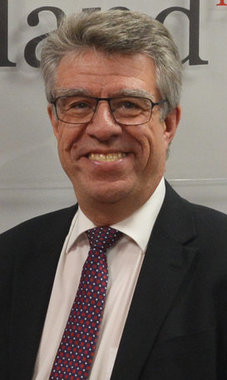 A PROPERTY lawyer who has worked on some of the region’s most significant sites has retired after a career spanning nearly 40 years.

Further afield he acted in 2016 in the development of the Grade I listed Acklam Hall, Middlesbrough for the owners of that site and the leasing by them to a major private healthcare provider. He has since acted for the same client in conjunction with the commercial property team at Bridge McFarland in the acquisition of a subsequent development project.

He now plans a retirement of Shakespeare, classical music, gardening and family life having recently become a grandfather.

Martyn said: “We have a big garden, a growing family, a lively Labradoodle and a very long list of jobs to get stuck into!”

Martyn began his career in general law in his home town of Leamington Spa after studying at Leicester University and Chester Law School. Following a move to Hull in 1990, he specialised in commercial property, building an influential client base and a strong reputation.

After 17 years in Hull, Martyn moved to the south bank and later to Bridge McFarland, where he focused on all aspects of development, sale and leasing of both commercial and residential land and property, including investment and general business advice. His focus has become narrower in recent years as house building has grown very substantially and become an important area for the firm.

Martyn said: “I knew a lot about Bridge McFarland and about its reputation as one of the premier commercial firms in the Humber area. It was a very good move. Bridge McFarland have always been very supportive, very forward-looking and great people to work with. The team has grown significantly since I started, and it has been great to have been a part of that.”

He still lives in Kirkella and, with clients on both sides of the Humber, has witnessed great change since moving to the area.

“City of Culture has made a difference to Hull and increased its profile. Since City of Culture there is generally a lot more optimism, and everything that’s going on around Hull Marina and Humber Street has added to that.”

“On the south bank we have worked on some important schemes with Snape Properties and I expect the regeneration project in Grimsby to make a big difference to the area.”

Stephen Oldridge, a Partner at Bridge McFarland, said: “It has been a pleasure working alongside Martyn since he joined us nearly four years ago. During his time at Bridge McFarland we have greatly benefitted from his experience and expertise. He has always been someone who is able to retain a great of sense of perspective – and humour – which is a wonderful quality to have when undertaking what can often be very stressful work with tight deadlines to meet. He will be missed by all at the firm and we wish him a long and healthy retirement.”