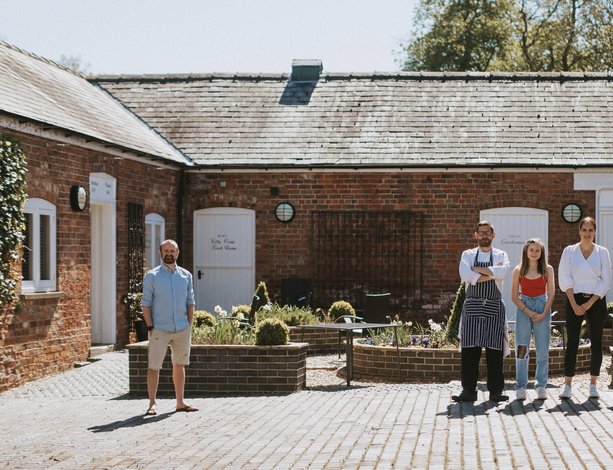 Of the businesses affected by the Coronavirus pandemic, the hospitality trade was hit fast and hard. But, against all odds, pubs, restaurants, bars and hotels have picked themselves back up, dusted themselves off and begun to reopen their doors.

Healing Manor Hotel was one of the lucky ones, managing to adapt and thrive in the most difficult of times. This feat however would not have been possible without the support of the community it is surrounded by. Steven and Charlotte Bennett – owners of the hotel – immediately took up arms with local, national and independent businesses alike to pay it forward and help local charities, community groups and vulnerable people via numerous fundraising channels and campaigns.

And now, their hard and charitable work – and that of their entire team – has been shortlisted for a national award. The only business from across the entirety of Lincolnshire to be named as a finalist, The Pig & Whistle at Healing Manor Hotel is now in the running to win The Morning Advertiser’s Great British Pub Award Charity Champion category.

In light of the exceptional circumstances this year has plunged us all into, The Morning Advertiser has done away with its usual in-house judging and instead opened the awards up to a public vote. Voting is now open and will close on August 26th at 23:59pm. Each category winner will receive £10,000 courtesy of Coca Cola, to either fund a business improvement or upgrade, or a put towards a community project.

Charlotte Bennett said: “To say we’re over the moon with being shortlisted is an understatement. Throughout the pandemic businesses have had to pull together otherwise they wouldn’t have survived. To be recognised for the work we’ve done locally supporting charities such as We Are One Foundation, St Andrew’s Hospice and The Health Tree Foundation, as well as providing keyworkers and the most vulnerable in our community with hot meals, means the world to us.

“We couldn’t have been so proactive in our approach without the invaluable help of individual donations, contributions from large companies and local independent business owners alike. Now, we’d just like to encourage as many people as people to get online and vote for us, so we can show the nation just how much Lincolnshire has been doing to champion comradery and progress.

“If we do win the Charity Champion category, we pledge to invest the £10,000 into generating 1000s of meals for We Are One Foundation – an initiative that would take place in September. As a local charity that works towards supporting the homeless and those in need with basic necessities such as hot meals, anything we can do to contribute to the outstanding work of We Are One Foundation is a privilege.”

This year’s awards have been adapted to recognise and reward the Pub Heroes of 2020 - those operators that have gone above and beyond during such trying times. Inundated with entries this year, The Morning Advertiser shortlisted pubs across 15 categories – with The Pig & Whistle being the ONLY candidate from Lincolnshire shortlisted. This is a huge coup for the county, as well as the business itself and one which follows in the footsteps of The Red Lion Inn, Raithby which, again, was the only Lincolnshire business shortlisted in last year’s event.

To vote for The Pig & Whistle at Healing Manor go to https://www.surveymonkey.co.uk/r/GBPA-Charity-Champion