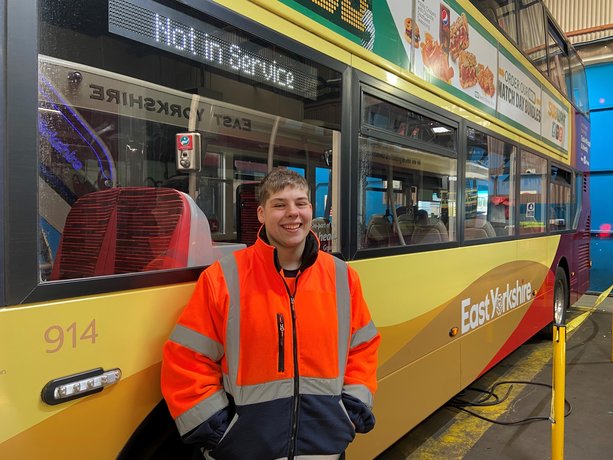 Jay Rodgers, Apprentice of the Year

JAY RODGERS, an engineering apprentice at bus company East Yorkshire, was named Apprentice of the Year at a major national awards ceremony earlier this month.

The award itself is given by the Society of Engineers (SOE) at their Safety and Sustainability awards to rising stars of the engineering industry. It is aimed at apprentices who strive for knowledge, practical skills and embrace new technology.

Jay, who is in the third year of a four-year Bus & Coach Engineering Technician apprenticeship at S&B Automotive Academy, has been at East Yorkshire’s main depot in Hull for three years and was nominated by the Bus & Coach Programme Manager, Gulam Bakawala. Gulam has said that he nominated Jay because “her potential as an engineer is great, and she is well on her path to reaching her full potential”.

Ben Gilligan, East Yorkshire’s Area Director, said: “We’re delighted to see Jay, accept the award for Apprentice of the Year. We are all proud of her and it is fantastic to see someone doing so well at the start of what is going to be a very bright future.”

Jay accepted the award at the national ceremony in Birmingham on the 7 October, and has returned to join the rest of the East Yorkshire apprentices to share her experience.

A full interview with Jay is available at eastyorkshirebuses.co.uk/news.