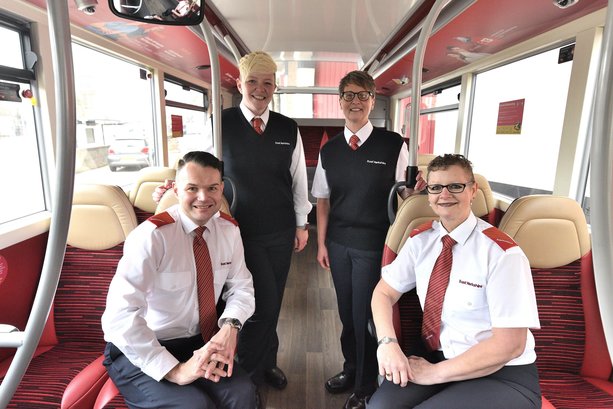 BUS company East Yorkshire has been named the winner of two prestigious awards.

The bus operator was crowned the overall winner at the Heart of East Yorkshire Awards, as well as picking up the Business in the Community trophy.

The awards celebrate individuals and organisations in the region that have given their all over the last year to help those in need, and East Yorkshire was praised by judges for its commitment to serving the community time and again.

The company was applauded for the wide variety of work it has done to enrich the community, both during and beyond the pandemic, including the introduction of flexible tickets to help passengers during lockdown, providing games and puzzles to keep people entertained at home, the Chatty Bus initiative to combat loneliness in society, and donating decommissioned buses to a school to provide them with extra space.

Ben Gilligan, East Yorkshire’s Area Director, said: “After a difficult year, it’s great to see our team recognised for the hard work they’ve put in throughout the pandemic.”

“I believe this is a true recognition of the challenges we’ve had this year as a team, and the role our drivers, cleaners, engineers and supervisors have played while working through three lockdowns.  We’ve kept the region moving through everything that’s been thrown at us, and it’s fantastic that our efforts have been noticed and appreciated by the local community.”

East Yorkshire were presented with their awards at a virtual ceremony hosted by presenter Kirsten O’Brien, which saw people and organisations recognised for good works across a variety of categories, including Local Hero, Neighbour of the Year and Courageous Child of the Year.

Dell Technologies - 5 Day Flash Sale
15% discount available
10% off your commute service with Zeelo and the Chamber
Do you get frustrated by customer feedback?
Go Green
See All