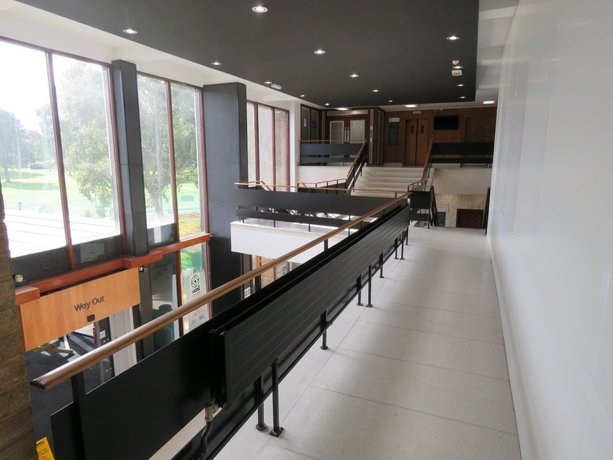 BRITCON has completed works on the transformation of Scunthorpe’s former Civic Centre into a new first-class university campus. The conversion follows the move by council staff to the newly-extended Church Square House in Scunthorpe town centre which was also completed by Britcon.

As appointed lead contractor on the project, Britcon has transformed the Grade II listed building taking into account its heritage features to make it suitable for higher education use.  The building's unique Roman mosaic has been carefully preserved and will remain in the reception area to greet students.

The old council chamber has become a new lecture theatre and the former office rooms have been converted into teaching spaces with capacity for 24 and 30 students. A library and specialist IT labs have also been installed as part of phase one.

The second phase will see the introduction of engineering and health laboratories as well as the planning for the second and third floors which will also present teaching and conference facilities and more social spaces.

North Lindsey College principal Mick Lochran said: "We are delighted with the new university campus which will have a wonderful impact on North Lincolnshire, allowing high-level learners to gain the skills that employers in the area need."

Councillor Rob Waltham, leader of North Lincolnshire Council, said: "It's fantastic to see the first phase completion on the transformation of the Civic Centre, thanks to £2 million funding from the Government through the Greater Lincolnshire LEP.  This UCNL project will embed higher-level skills into our local economy and create a direct link between businesses and graduates with the right skills to support growth.”

Britcon was recently reappointed to the Construction and Highways Framework for North Lincolnshire Council for the next four years on all lots for building works up to the value of £10 million. It was also appointed to all general civils and road surfacing lots.  It recently completed the new £5.8 million state of the art office building for Ongo Homes and the £5.7 million extension and refurbishment of Church Square council offices.

Nick Shepherd, managing director at Britcon, said: "We are very pleased to deliver this fantastic new education facility as part of a cluster of transformational projects in Scunthorpe our home town.  We have worked closely with the client team and the council's heritage team to ensure the development responds to the architectural and heritage qualities of the Grade II listed building and will continue to do so in the next phase.

Britcon has handed over the project in time for the first student enrolment term this month and will progress works on the remaining floors currently scheduled to be complete summer 2020.

Established for almost 30 years, Britcon is a £45+ million turnover business headquartered in Scunthorpe and directly employs 110 people on its project sites across the UK.  Key contracts secured in the last 12 months include a £1.6 million warehouse and office facility for Viking Shipping in Selby, a £3 million train inspection and maintenance facility for Stobart Rail in Newton Heath, Manchester and numerous schemes for long standing clients with new instructions recently coming from Associated British Ports, Drax Power, McCain Foods and East Riding of Yorkshire Council.