Just do it! The key message from a business masterclass for Dutch delegation 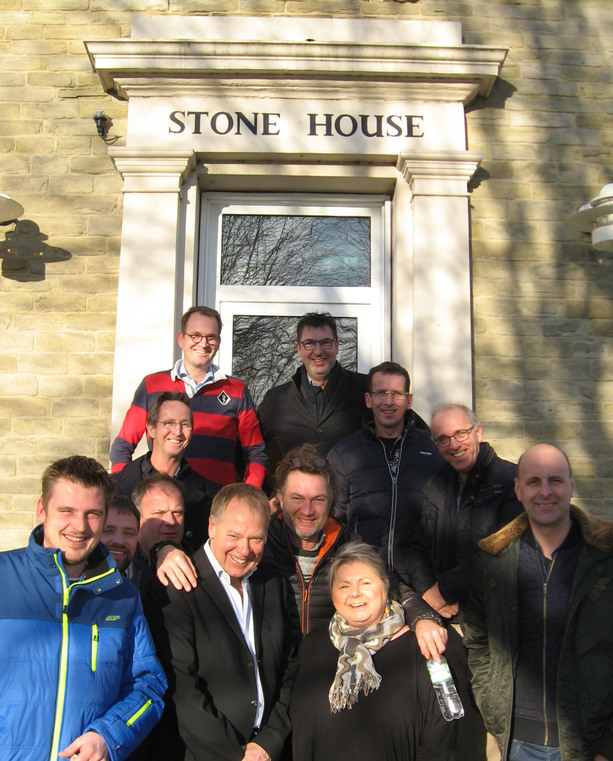 Peter Aarosin and Pauline Wade (front centre) pictured with their visitors from the Netherlands.

JUST do it! That’s the philosophy of success for the managing director of one of the Humber’s leading logistics groups.

An event organised by the Hull and Humber Chamber of Commerce’s International Trade Director, Pauline Wade, for a 15-strong group of visiting business leaders from the Netherlands, saw Peter Aarosin deliver a business masterclass at his Stone House headquarters in Goole.

Peter explained how he had built the company from scratch after coming to the UK from Denmark 39 years ago as a trainee in shipping, having turned down a dream job in London to follow his ambition of working for himself, and the rest, as they say, is history.

The Dutch businessmen heard how the logistics company has grown from its core business of chartering, port agency, stevedoring and wind energy projects to now include an interest in a road-based logistics business with 100 trucks and 20,000 sq metres of high quality warehousing and a Danish company operating 30 ships. TDL Wind Ltd is working in the growing renewables sector and IPL is an industrial packaging company.

The combined Danbrit Holdings group is involved with ships, ports and trucks including seven port terminals in Denmark.

Peter is a passionate advocate of the Energy Estuary and the benefits of living and working in the Humber, having based his company and his life in Goole, the UK’s largest inland port.

Asked by the Dutch businessmen what his strategy for the future of his business is, Peter explained that he believed the key to success was to have a lot of young employees around you. His strategy is to get apprentices into the business who will bring new ideas to drive the business forward. He also stressed the importance of taking the time to talk to your staff to better understand the issues which concern them, as happy and motivated staff always work better for you.

The group from the Netherlands were keen to learn about the work of Green Port Hull, and Pauline explained how the initiative was funded by the British Government and had helped to bring the renewables industry to the Humber. Siemens had built its turbine blade factory here and it had opened exactly a year ago, with vessels taking the blades out to the North Sea. It was a major development which would see work continuing until at least 2030.

Answering a series of questions from the Dutch delegation, Peter said he believes you have to enjoy what you are doing and have fun every day. If you’re enjoying what you’re doing and having fun, you’re probably good at what you do, and then you usually find you have a pound in your pocket when you need one.

Asked what the key factors to his success are: Peter said: “You have to be humble, deliver quality and be seen to be reliable. You also have to react quickly to a downturn and take action, and you can’t be afraid of change as markets can change quickly”.

He also talked about his long-held ambition for developing an Intermodal Terminal at Goole, a project he has spent a lot of time on and hopes will be a success.

The Dutch business leaders were also keen to discuss Brexit and views were exchanged.

The businessmen also wanted to know if Danbrit Holdings had worked with the Dutch, and how he had found that relationship. Peter revealed that he had been the part-owner of a company in Rotterdam for 20 years and had never had a problem working with the Dutch and he would give them 10 out of 10.

So if he had his time again, what would he do differently, was the final question. The answer was emphatic, and delivered with Peter’s familiar charismatic smile . . . Absolutely nothing!