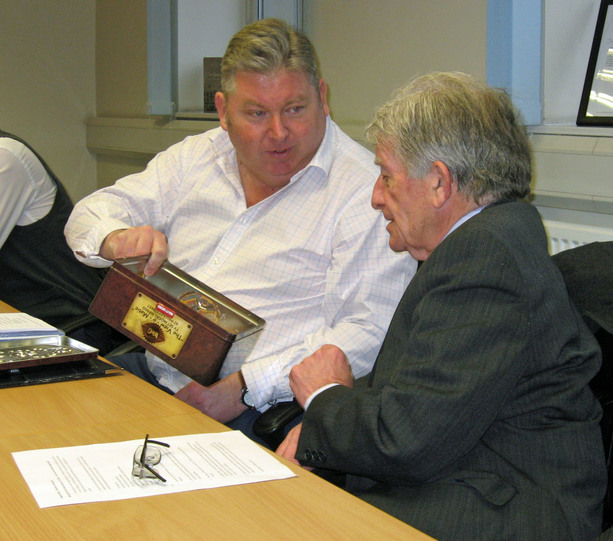 Cllr Brady in talks with Ian Kelly in the Chamber’s boardroom.

THE Leader of Hull City Council, Cllr Stephen Brady, met recently with Chamber leaders to discuss the key topics of the day affecting the city.

Cllr Brady highlighted that the Council was facing its seventh year of reductions in Central Government funding which had seen £130-million taken out of its budget during that time. Cuts to Social Services budgets were causing severe pressures and were now clearly visible. Hull’s Council Leader felt the Government had to do something radical about this and simply putting a couple of million more pounds into the pot was not enough to resolve the local or national care funding crisis. He said Hull Council was nevertheless working very well with the local NHS Clinical Commissioning Group and also with the fire and police services to alleviate some of the worst problems arising from cuts.

He told Chamber leaders how the Council had gone for an early budget this year having agreed a four-year deal with the Government. They decided to go for a 4.9% increase to help social services and council tax. Secretary of State for Local Government Sajid Javid had said local councils could go for an extra 1% on council tax this year but Hull City Council decided not to.

Cllr Brady said the new Hull Venue was coming on well and would be open later in the year and was expected to provide a boost around the Princess Quay area and new car parking was being provided.

The Indoor Market in the Old Town had reopened after a £3-million refurbishment and the Council had got some big names to move in there. He also said a new swimming baths would be opening in the spring and a new cycle track was being built at Ennerdale.

During the discussions, Cllr Brady confirmed the Council was committed to building a Cruise Terminal in Hull which it was hoped would open up new tourist business for the city centre, as around a third of cruise passengers usually stay near to their ship when visiting a port. In Hull’s case, it was thought other passengers may also visit Lincoln or York. He said the controversy over its location was being looked at and discussions were ongoing.

The Council Leader revealed Hull City Council officials had held high level talks with the Government recently and they wanted to do some innovative things with skills. They were pushing for more city centre living and he noted it was really pleasing to see the current work that was going on in the city to develop that aspect of people living in the city centre which would make it much more vibrant, especially in the evenings.

Despite the budget challenges, he noted his Council had not closed one library down. The library on Holderness Road would be moved into East Park and £1.2-million was being put into leisure services and parks to refurbish them generally.

Cllr Brady said that all-in-all, the Council was doing the very best it could under trying circumstances. He noted that the finances were balanced and they were building up reserves, however possible business rate changes in the future could leave Hull with a £40-million shortfall because of its tight city boundaries.