Sir Keir gets down to Brexit with business in Humber 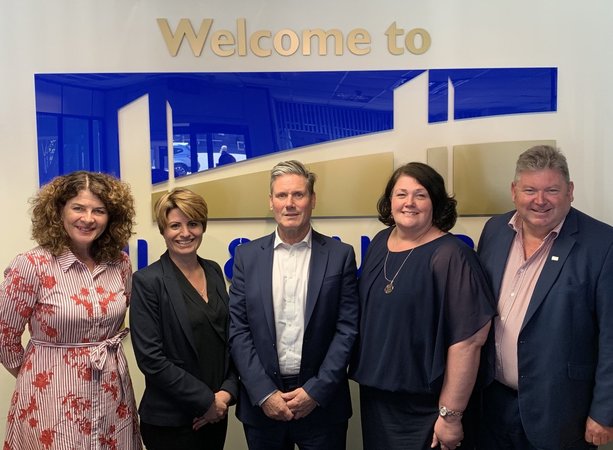 SHADOW Brexit Secretary Sir Keir Starmer and Hull MPs Emma Hardy and Diana Johnson met with business leaders this evening to discuss the possible implications of Brexit for the nation and the Humber.

The Labour Front Bencher and prominent Remainer, discussed various outcomes, including the possibility of Brexit not happening and the Labour Party’s position, before taking questions from concerned Humber business leaders.

Sir Keir, the MP for the safe Labour seat of Holborn and St Pancras, said: “I am here in listening mode and want to hear the views of residents and businesses who voted strongly to leave the European Union”.

Those views were loud and clear with Humber business leaders highlighting the issues they face, with one business owner saying he may be left with no alternative but to close his business completely if we left the EU without a deal. Others complained of stagnation of trade amid the crippling uncertainty.

Sir Keir said after the meeting: “We have had a very useful, full and frank discussion around the table this evening and it is clear that many businesses have serious concerns about the uncertainty about Brexit. We have to find a way of clearing this impasse and moving forward”.

Asked about the prospects of leaving the EU by October 31, he said the timing just doesn’t work and he couldn’t see it happening.

When he was challenged about the Labour Party’s shift in its position on Brexit and about what it would do in the event of a General Election, he said his own personal view was that the Party would have to spell out its position clearly and if it won the election it would then have a mandate from the people.

Sir Keir thanked Emma Hardy for inviting him to Hull and said she was doing an excellent job on his team.

Emma said: “It is really important for the city that we have got a Labour Front Bencher to come to Hull and listen to businesses and as a Hull MP, I want to do everything I can to ensure businesses can thrive and grow.”

Chamber Chief Executive, Dr Ian Kelly welcomed Sir Keir’s visit to Hull and the chance to engage with one of the Labour Party’s most influential figures. He noted that the Chamber had many Brexit and Remain supporters on both sides of the argument, but the biggest message of all at the moment to all politicians was “to break the gridlock and move on, one way or the other”.