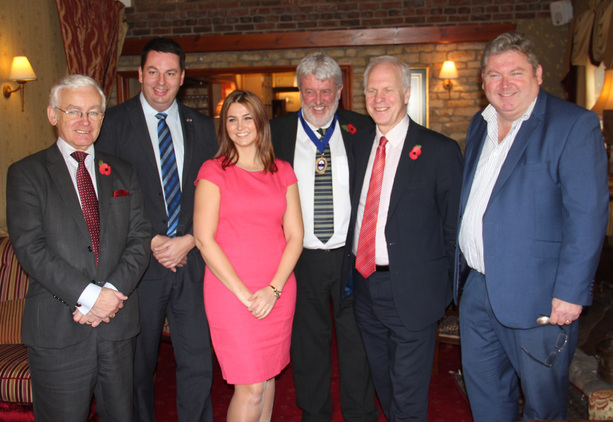 ANDREW Percy, Minister for the Northern Powerhouse, has spoken out on Brexit at a Chamber lunch for South Bank MPs and senior business leaders.

The four Northern Lincolnshire MPs, including Nic Dakin, Melanie Onn and Martin Vickers, as well as Andrew Percy, learnt first-hand from senior local business leaders about their concerns around the issues of the day, including Brexit, Devolution and the Northern Powerhouse.

The event, held at the famous Winteringham Fields restaurant and hotel in North Lincolnshire on Friday (Nov 4) was attended by representatives of some of the biggest and most influential businesses in Northern Lincolnshire.

Mr Percy light-heartedly revealed that as well as being the Minister for the Northern Powerhouse, he was also in charge of several other Government portfolios, including rather disconcertingly, being part of the team charged with organising Royal funerals!

However, the Minister was resolute on the subject of Europe, dismissing talk of a second Referendum and insisting Brexit would happen, despite the recent High Court decision which ordered that MPs should vote before Article 50 was invoked. He admitted that uncertainty still surrounds Brexit in some quarters and said the court’s decision was “unhelpful and would potentially lengthen the period of uncertainty which is damaging to business”.

On business support and regeneration, Mr Percy praised the Chamber and the two public/private sector LEP partnerships which serve the Northern Lincolnshire area for their good work, and said he believed it was important to ensure the LEPs’ regeneration work continued.

As regards Devolution the Chamber welcomed assurances that Scunthorpe and Grimsby would stay part of the Northern Powerhouse as well as remaining part of the Energy Estuary Concept as Devolution evolved locally.

Among the business leaders to directly lobby Mr Percy, was Gareth Beese, from British Steel, who thanked Scunthorpe MP Nic Dakin for his unwavering support and again appealed for the Government to help the British steel industry with business rate concessions and to level the playing field with its European competitors on energy costs.

Cleethorpes MP Martin Vickers and Chamber Chief Executive Dr Ian Kelly finished the lunch with exchange votes of thanks which highlighted all the local MPs’ longstanding commitment to the area even when on some subjects clear differences remained.