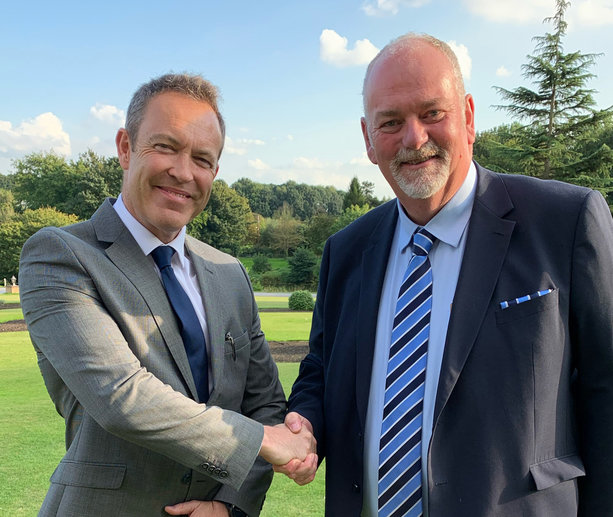 Chamber President Phil Jones with Jonathan Evison after the meeting at Cave Castle.

THE new Police and Crime Commissioner for Humberside Police outlined his plans for the force at a recent Chamber Council meeting held at Cave Castle in South Cave.

Jonathan Evison, who was elected in May taking over from Keith Hunter, outlined his “exciting agenda” to the Chamber’s most senior business leaders at their September meeting.

Mr Evison highlighted how crime thrives in deprived areas so developments around the Humber Freeport, new jobs at Siemens and other inward investment is to be welcomed and encouraged.

He said the new Police and Crime Plan would be published in October and he wanted to try to tackle the higher volumes of crime and the things that come with that. His role, he explained, was to hold the Chief Constable to account, but emphasised their good working relationship.

Anti-social behaviour, Crime Safety Partnerships, and county lines drugs issues were all on his agenda. Operation Galaxy had been successful in fighting drugs crime and had seen many successes.

He also acknowledged concerns about the 101 none emergency calls system. He said the system had improved dramatically over the last two or three years, but people still think it is a poor service, but it is now much improved.

Mr Evison said Humberside Police had 2,000 officers and 1,400 police staff and would be getting 200 more officers in the next 18 months, but there was a lag between employing people and them becoming effective officers as they needed to be trained up and get to know their jobs.

Special Constables also contributed to the police service, he noted, suggesting that there are a lot of good, skilled people who might like to do a couple of days work on a voluntary basis for the police and support their communities.

He also wanted to see a reduction in violent crime and was focusing on hot spot intelligence.

He highlighted to the Chamber business leaders that the force had just received a £390,000 grant from the Home Office, which was in addition to another half-a-million pounds since he took office, which he said he wants to use to try to get ahead of the curve and to try to stop victims becoming victims in the first place.

He recalled the Tufty Club and PC Badger, and explained how he wanted young children to be introduced to the Police at around the age of seven so they know a police officer will look after them, and build good relationships.

Another key issue was reoffending, and Mr Evison said he wanted to be more pro-active as far as probation was concerned, noting that Police and Crime Commissioners can tap into that and task people to target problem areas like fly-tipping.

He was also looking to set up a charity with Lottery, police and business funding to help combat crime, and appealed for anyone interested in supporting that to get in touch.

Mr Evison said he had a very exciting agenda and was working with positive, passionate people to make a positive change.

Chamber President Phil Jones thanked Mr Evison for his talk and wished him well for his term in office.