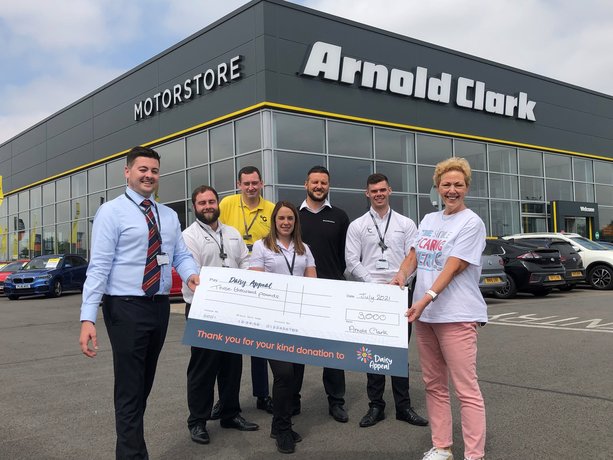 Claire Levy, Fundraiser for the Daisy Appeal, receiving a cheque for £3,000 from George Ferebee of Arnold Clark’s York Motorstore.

THE charity behind a campaign to raise £8.5 million to provide a Molecular Imaging Research (MIR) Centre at Castle Hill Hospital has received a £3,000 boost from the UK’s largest independent car retailer.

Staff at the York branch of Arnold Clark handed over the donation from the company’s community programme to support the Daisy Appeal, which has already raised more than £20m to fund cutting-edge research and state-of-the-art equipment and facilities for patients in the Humber region.

Martin Ralph, General Manager Arnold Clark York Motorstore, said: “Thank you to all of those at the Daisy Appeal who continue to do incredible work, transforming medical facilities around East Yorkshire and North Lincolnshire.

“At Arnold Clark, we believe in helping the communities in which we work and, through this donation, we hope we can help you continue to make a difference in the fight against cancer, heart disease and dementia.”

Arnold Clark has built a nationwide network of more than 200 dealerships as well as service, repair and parts centres since opening its first site in Glasgow in 1954. East Yorkshire and Northern Lincolnshire are served by branches in York and Doncaster.

Claire Levy, Fundraiser for the Daisy Appeal, contacted the company after hearing about its commitment to improving the communities in which it works by supporting charities and local businesses.

Claire said: “I explained how the Daisy Appeal has already raised millions of pounds to fund research, facilities and equipment and I was delighted that the team at Arnold Clark felt able to support it.

“We have now raised £7.5m towards our target for the new MIR centre which will enable the delivery of radioactive tracers quickly and effectively to individual patients right next door in the Jack Brignall PET-CT Scanning Centre.

“Currently the tracers are delivered from West Yorkshire and the ability to produce our own will be transformative for patients – they will be able to have scans more quickly for cancer as well as for heart disease and some forms of dementia. It will lead to quicker and earlier diagnosis and treatment.

“Along the way we have had support from families, individuals, community organisations and, increasingly, from businesses which are eager to contribute to causes that can benefit customers, colleagues and the wider public. We are extremely grateful for the donation from Arnold Clark and for their help in raising awareness of the work of the Daisy Appeal.”

To find out more about how the Daisy Appeal please visIT  https://daisyappeal.org/