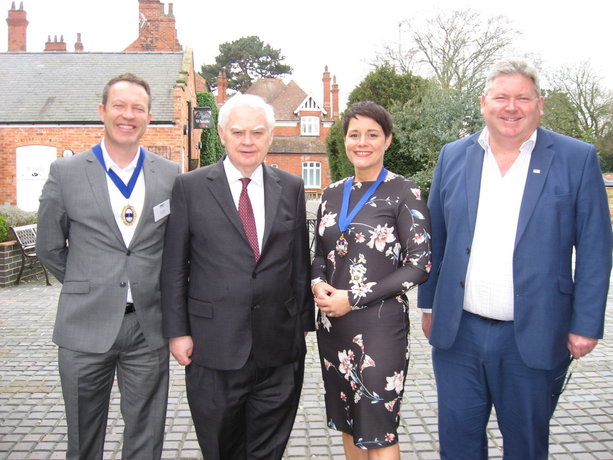 FORMER Chancellor of the Exchequer and leading Brexiteer Lord Norman Lamont reassured Humber business leaders about the likely implications of Brexit during a private dinner held at Healing Manor.

“Businesses in the Humber have little to fear from Brexit,” he told invited guests during a revealing evening in which he reminisced about his teenage years growing up in Grimsby living next door to trawler owners, his time at Cambridge University and his rise to power in Government working with John Major and Margaret Thatcher.

Lord Lamont is an ardent Grimsby Town fan, and the team’s results are the first thing he looks at on a Saturday afternoon, he revealed. The veteran politician also recalled giving his local paper the scoop on his resignation from John Major’s Government in May, 1993 when his mum phoned the newsroom to break the news. He was presented with a framed copy of the front page, which led to the paper winning a national Scoop of the Year award.

Lord Lamont was also the guest of honour at the Chamber’s Annual General Meeting which saw Kathy Fillingham of myenergi take over as Chamber President from Sally Booker, with Phil Jones of Link Agency becoming the new Vice President.

Lord Lamont now sits on the Grimsby Town Regeneration Partnership board, at the request of another famous son, David Ross, of Carphone Warehouse fame, which is seeing the area become a pilot for a new way of working with Government on regeneration. Lord Lamont highlighted the many positive things happening in the region – the development of offshore wind and ports and the chemical industry on the Humber Bank.

Lord Lamont said: “I was very interested to be invited onto the Partnership Board, there’s only a limited amount I can do, but David thought I could be a pressure point in Whitehall, and I do that. It is an interesting combination of public and private organisations, and when I’ve been in meetings with Greg Clark (Secretary of State for Business, Energy and Industrial Strategy), I can see he is very keen on the concept and sees it as something of a model for other towns with similar problems.

Lord Lamont said he believed Brexit would offer “lots of opportunities” for the town. “Grimsby is a port. Trade will continue to flow in both directions and I don't believe Brexit for one minute is going to be a disaster. There are lots of opportunities out there. I think probably in 10 years’ time people will even forget we were even members of the European Union.

“Different governments will have different viewpoints,” he said of the 27 European states. “One shouldn’t believe the bland statements always made on television about how no movement on the Irish backstop is possible. I think there is a willingness to with individual governments, or the more important governments, be it Germany, Holland and Ireland. We may be moving to the beginning of the end of this.”

Sensing a weariness from the public, he said: “I think an area like this will have great opportunities outside of the EU. There is no reason why our trade with the EU won’t continue on the same level. I think it will continue tariff free. Paperwork will be a little bit different, but it won’t be insurmountable. There may be extra costs but it won’t lead to a sharp fall off. We will have European opportunity and opportunity with other parts of the world.

“There will be more flexibility on state aid, on things like regional development and industrial strategy, which could be very important for a place like this, looking at enterprise zones and free ports. These are the things government will have much more freedom to initiate without interference from Brussels.

“We have every opportunity for Grimsby to build itself the future it deserves.”