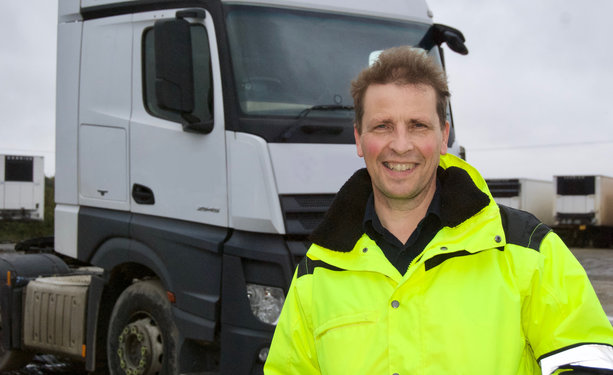 EXPERIENCED lorry driver Alan Kaye has become one of only a handful of people throughout the UK to earn a new Driver and Vehicle Standards Agency qualification for assessing professional lorry drivers.

Alongside his practical transport experience driving all kinds of lorries, Alan also has training experience gained in the telecoms industry, and has combined the two as a foundation for the new role, securing his qualification at Immingham-based JMT Training, becoming the first person to do so at JMT with instructor Ian Goldacre.

Alan is keen to help improve safety for lorries and successfully campaigned to increase the speed limit for HGVs on A roads from 40 to 50mph, He was prompted to launch that campaign after seeing many dangerous overtaking manoeuvres by car drivers feeling frustrated at being held up by slow-moving lorries. The change was introduced in 2015.

Alan said: “Until now there has been no benchmark for assessing an existing driver. With the arrival of a new recognised standard it’s probably only a matter of time before all assessments will need to be carried out to the new standard to gain credibility.

“If insurers require remedial training for a driver, that’s where an approved assessor comes in. Haulage firms who have insurance issues because of a high number of claims, will be able to present reports to their insurers based on the new standard. Insurers are increasingly are asking for such monitoring to be conducted.”

Alan has held a Class 1 licence since 1984 and driven more than a million miles, and added: “The opportunity to have drivers accurately assessed to a recognised standard will enable hauliers to ‘up their game’, proactively reviewing their drivers to gain safety and cost control benefits.

“My role is not to test the driver, but to spend time with him or her and put them at ease to get them to drive to the best of their ability. The best environment for such an assessment is one that has previously proved to be troublesome, and assess their driving. Based on that, I would then submit a written assessment to the employer with recommendations for the amount and kind of remedial training required.”