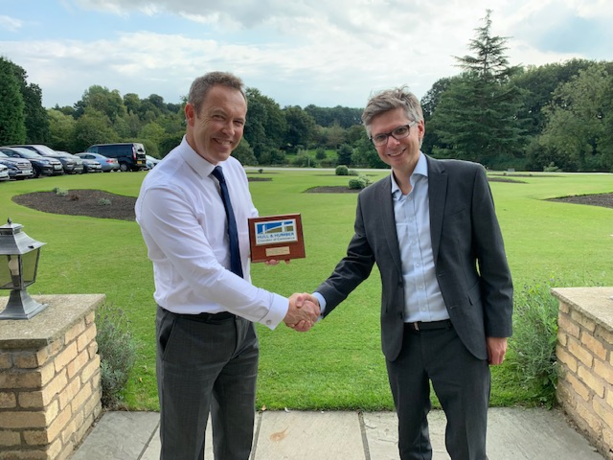 HEAD of Cluster Development for Drax, Richard Gwilliam, was presented with a Patrons’ Plaque at this month’s (sept) Chamber Council meeting as the company reinforces its relationship with the Hull & Humber Chamber of Commerce.

Richard was presented with his plaque by Chamber President Phil Jones during the well-attended meeting at Cave Castle Hotel. The President thanked Richard for becoming a Patron of the Chamber, a move which will not only help Drax, but also help the Chamber to continue to support smaller companies around the Humber.

The two businesses will be working closely together in the coming months, along with other stakeholders, to assist Drax in developing a robust supply chain for its Bioenergy with Carbon Capture and Storage project (BECCS) which will ultimately help the Humber reach its net zero carbon emissions goals.

Richard thanked the Chamber for its solid support of Drax in recent months, saying the business group has been a great help in driving forward the zero carbon ambitions for the region. “We have made great progress so far, and we’re pleased that the Chamber will be helping us prepare for the next steps that will be taken as we seek planning approval for the BECCS project. Identifying a robust supply chain is key to this project”.

Drax will be hosting a series of events throughout 2022 in partnership with the Chamber and other stakeholders. The first of these will be an introductory webinar on Thursday (September 23, 2021), run with business support organisation NOF. The initial event will give new and prospective suppliers the opportunity to learn more about the BECCS project, as well as how they can be involved in delivering this vital negative emissions technology.

Graham Backhouse, Drax’s Commercial Director for the BECCS project, said: “Negative emissions technologies like BECCS will play a vital role in enabling the UK to reach its net zero goals. At its peak, BECCS at Drax will protect and create over 10,000 jobs, levelling up the north, and positioning the UK as a global leader in this climate-saving technology.

“This programme of events is a fantastic opportunity for businesses of all sizes to get involved and learn more about the project, and we want to encourage a range of companies from across the country to take part.”

Drax has a proven track record in delivering ambitious and pioneering infrastructure projects – the conversion of its power station in North Yorkshire to use sustainable biomass instead of coal has enabled it to become the UK’s largest single site renewable generator, reducing its emissions by over 90% and paving the way for the deployment of BECCS.

The event takes place ahead of a formal public consultation on Drax’s BECCS plans in November, when stakeholders including local communities will be able to learn more about the proposed project and provide their feedback.

Businesses which are interested in attending the introductory supplier event webinar on September 23, or the event series more generally to find out how they can be involved, can register their interest via www.drax.com/supplierevent.