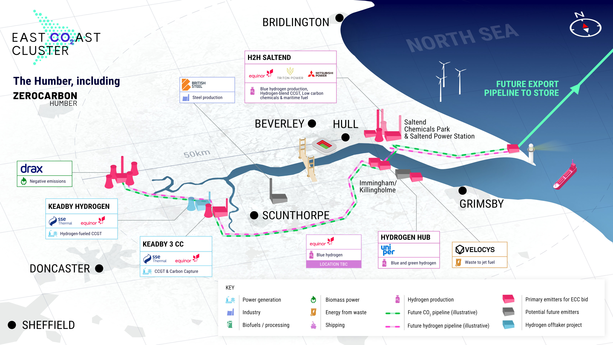 THE Hull & Humber Chamber of Commerce has welcomed the Government announcement that the East Coast Cluster has been selected as one of the UK’s first two carbon capture and storage projects to be taken forward.

This news puts the scheme to decarbonise the Humber, the UK’s largest CO2 emitter, on course for deployment in the mid-2020s, and is great news for the continued progression of the BECCS project at Drax.

The project aims to create and support an average of 25,000 jobs per year between 2023 and 2050, with approximately 41,000 jobs at the project’s peak in 2026. These skilled jobs in exciting new industries, including industrial carbon capture, low-carbon hydrogen production, negative emissions power, and power with carbon capture, can play an important part of levelling up in the UK.

Chamber Chief Executive, Dr Ian Kelly said: “This is a significant milestone in delivering a Zero Carbon Humber and the UK’s ambition of the first net zero industrial cluster by 2040. We will continue to support this ambition as it becomes a reality in the coming years.

“The Government will now take forward negotiations with the transport and storage operators and begin the process of selecting the individual carbon capture projects across the region that it will progress first”.