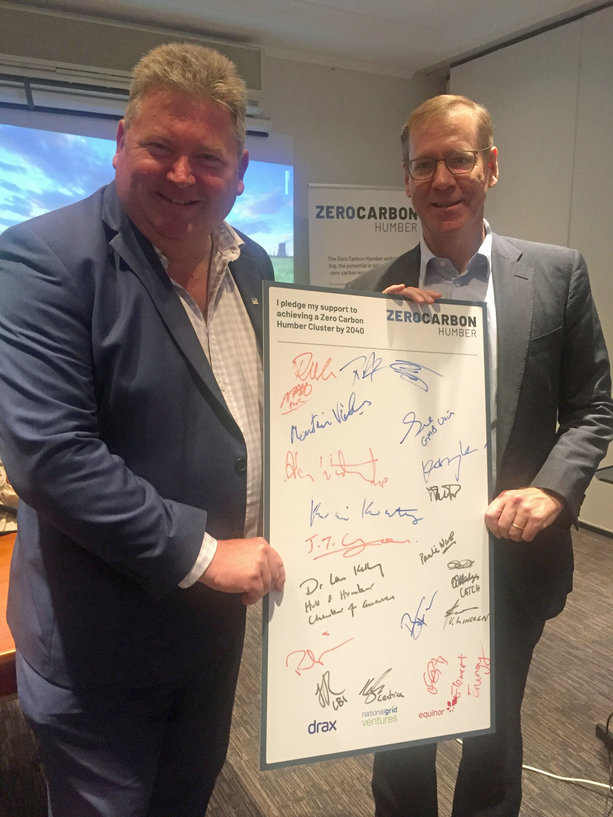 Dr Kelly pictured “signing the pledge” for a zero carbon economy with Will Gardiner, the CEO of Drax Group plc in Hull.

HULL & Humber Chamber of Commerce Chief Executive Dr Ian Kelly signed up today in Hull to a future partnership with Drax Group plc, the National Grid and specialist carbon capture experts Equinor, to an ambition to make the Humber one of the first carbon neutral economies in the world.

Dr Kelly said: “The Humber’s economy was still a heavy polluter because of its current role as the UK’s Energy Estuary” focused on keeping the wheels of northern industry turning and the UK’s lights on at night. But we are also at the cutting edge of a carbon reducing transformation thanks to the new offshore renewables industry led by Orsted, Siemens, ABP and others.”

Dr Kelly added: “These are exciting times for our part of the world and we are keen for all businesses in the Humber to play their parts in creating a more environmentally-friendly future.”

The Chamber which created the Humber Local Enterprise Partnership quango in 2012 on behalf of the Government in order to unlock business-friendly Enterprise Zones to support the renewables sector, is delighted that a refreshed carbon capture offer from Drax and its national partners will now pioneer a new ambition for a Zero Carbon Humber which could lead the world.

The Humber economy generates £18-billion each year for the UK economy, driven largely by its expertise in industrial processes. The Humber’s industrial economy is the biggest in the UK, employing 55,000 people and by 2030 the UK would need to be storing 10-million tonnes of CO2 per year to stay on track to achieve a net zero economy.