Chamber members get a taste of life on the factory floor 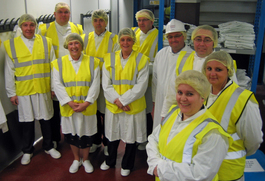 The firm’s managing director, John Tynan, welcomed members to the meeting at their factory on Normanby Enterprise Park, before giving a brief introduction to the plant and the work it does.

The meeting was attended by Cllr Neil Poole, Portfolio Holder Policy and Resources and Mike Wedgewood, Director of Policy and Resources from North Lincolnshire Council, who came to consult with the Area Council on the authority’s forthcoming budget proposals and cuts. They explained to the meeting some of the challenges the council faces in balancing the books and how they are making the tendering process for firms wanting to win council contracts more transparent and open.

Members were reminded of some of the council’s responsibilities, which include social care for children and adults, support for schools, public health and safety, highways, waste collection and disposal, school buses, trading standards and environmental health and business support services.
The council also looks after the newly-refurbished Baths Hall in Scunthorpe which hosted the Chamber’s Northern Lincolnshire Business Awards, and the popular Normanby Hall estate.

The roll-out of broadband in Northern Lincolnshire and the importance of getting a predominantly rural area on line was also discussed – which the meeting heard will also help the council reduce its costs as more people are able to interact with the local authority via the internet.
Members, including some former employees of the factory, then donned protective clothing, ear plugs and hair nets before enjoying a tour of Karro Foods production facility which employs 392 full-time staff and a further 77 agency workers.

The company became part of the Karro Food Group in 2013 in a management buyout. The plant has seen an investment of £3-million which was secured from the group to install new equipment which prepares pork products for the firm’s wide customer base which incorporates many of the major supermarket chains including Tesco, Sainsbury, Aldi, Morrison’s, Red Tractor and Spar.

The group was fascinated to see cuts of pork being fed into one end of a machine, and neatly sliced bacon appearing at the other. They watched as it was packed into plastic cartons, sealed, labelled and packed ready for delivery to the supermarkets.

The factory processes 622 tons of bacon products per week and Karro Foods is proud that none of its waste goes to landfill sites. Its green credentials are further boosted as the plant has created a paperless office environment in its production areas.