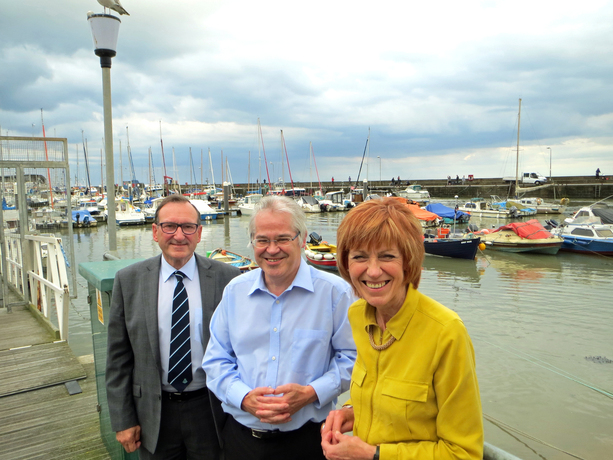 Pictured after the Bridlington meeting are (left to right) Chris Wright, Neil Watson and Coun Evison.

BRIDLINGTON Chamber members were delighted to be welcomed to the Bridlington Harbour Commissioner’s offices for their July meeting.

Mr Wright told the meeting that everything was now working well and relations with East Riding Council were much improved. He said the scheme was now being priced up and the length of the piers decided.

The North Pier extension is expected to cost up to £8-million and work is still ongoing with environmental impact assessments and mud sampling to prepare for the build, but everything was now on track and it was hopefully just a matter of time before work would begin.

East Riding Council’s Nigel Atkinson added that the Council now needed to look at how to bring forward an affordable scheme which was deliverable, noting that there was still a job to do to find the money.

Mr Wright said it was important to avoid too much upheaval during the development, especially for the fishing industry, which now boasts the largest lobster landing port in Europe. He added that it was difficult to say when work would start at this stage, as there was still the issue of affordability and workability.

Coun Jane Evison, Cabinet Member for the Economy from East Riding Council, said people were now starting to see what was developing with the scheme. “It’s about reaching out and finding areas of agreement between everyone who wants to see it progress,” she said.

Chris Wright also informed the meeting about a dredger which will be coming to Bridlington in the autumn. “It is rather bespoke in that the MCA has no rules for it because it is under 25m in length. It won’t be here until late October, but it will be ideal for Bridlington harbour. It will dig down to around 17ft to clear out the sediment.

He told members that the harbour had to be dredged, otherwise they would lose the boats if they can’t get into the harbour, and once they go somewhere else, we may well lose them forever.

Chamber Bridlington Chairman Neil Watson and Chief Executive Ian Kelly thanked Chris for hosting the meeting and warmly welcomed the relationship he, Jane Evison and the council officers were now building in order to get the Marina everyone in Bridlington wanted and deserved.