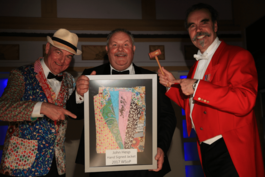 THE twelfth Chamber Bridlington and Yorkshire Coast Business Awards took place on Friday 19th October to recognise and celebrate local business success. The event was held in the Royal Hall at The Bridlington Spa and was attended by business people from across the Yorkshire region. The compére for the evening was Blair Jacobs, a freelance Broadcaster, producer, voice-over and media-trainer based in the East Riding of Yorkshire. Since 1994, Jacobs has been working mainly for the BBC, producing and presenting radio programmes. He's also presented numerous regional television news bulletins for Look North in Yorkshire as well as fronting corporate videos for clients.

Firstly, the most significant announcement of an excellent evening was the news that both Geof Humphrey and Neil Watson would be retiring from the organising committee after the event. Geof and Neil have been by far the biggest mainstays and organisers of the event since 2007 and filling their shoes will be a stupendous task. They were each presented with the gift of a bottle of champagne by Chamber President Sally Booker, as a small token of thanks for their huge input.

The biggest congratulations go to Williams Den, winners of the grand prize - The Overall Business of the Year Award. They also won the Start Up Business of 2018 Award.

The Yorkshire Wolds Cookery School & Highfield Farm B & B, Southburn, near Driffield, won the Best Hospitality & Tourism Business of 2018 Award and this year’s Business Person of the Year was Simon Barrington from Care Improvement Associates in Scarborough.

CB Solutions UK Limited, of Lissett, won the Business of 2018 with a Green Ethos and the recipient of the Lifetime Achievement Award was John Good, of John Good & Sons, of Hessle.

The next Award Winners to go up onto the stage were Spirit of Yorkshire Distillery from Hunmanby, for the Small Business of 2018.

The St Stephen’s Shopping Centre Security Team were the Judges’ choice for the Award for the Business with Good Training.

Beats Bus Limited, from Hull, won the Culture and Arts Business Award and McAusland Turner, also of Hull, were presented with the Best Medium/Large Business Award. The Award for Business Innovation went to HTS Tyre Recycling of Hull’

Entertainment came in the form of excellent local comedienne Rosie Jones and the Royal Piano Show, who perform all over Europe. Also performing were identical twin sopranos Naomi and Hannah of Classical Reflection.

A charity raffle and auction helped raised £4066 for the Bridlington Club for Young People.

The President of the Chamber, President, said: “The Chamber Bridlington and Yorkshire Coast Business Awards have been another great success. I’d like to thank the organising team and of course our sponsors. We hope everyone enjoyed the night and we look forward to doing it all again next year.”

Event organiser Geof Humphrey added: “It was a truly magnificent evening and everyone seemed to enjoy it very much. Everything from the food to the entertainment to the presentation was spot on and hopefully we can continue for many more years.”

“I would like to thank all who attended or got involved in any way and I am proud of how far we have come with these awards.”

The Chamber and the organising committee would like to give heartfelt thanks to all the companies who were Sponsors of the Awards. Without them it would not go ahead.

The 2019 Awards will be at the Spa Bridlington on Friday 18th October. For more information please contact Hayley Walmesley-Browne on 01482 324976 or at mailto:h.walmesley-browne@hull-humber-chamber.co.uk

Could you help make the UK safer? Join our webinar with DASA to find out how you could help
Incoterms - Online
Customs Declaration Training - Online
See All

10% off your commute service with Zeelo and the Chamber
Dell Technologies are offering Chamber members discounts on some products
Do you get frustrated by customer feedback?
Go Green
Free VoIP phone and setup
See All